In 1837 brothers Carl and Eduard Vieweg, publishers from nearby Braunschweig, replaced the Schunter watermill with a nearby windmill. They wanted to build a paper mill to produce paper for their own publishing house and to have it powered using the wind. The brothers were given permission to build the windmill as long as, within one year, they provided as much mill grinding capacity for the Wendhausen area as they had with the three millstones from the watermill.

A Dutch-style windmill with five sails was chosen to provide additional power and could accommodate more grinding and milling than traditional and older post mills. Such windmills are rare and it is the only one of its kind in Germany and. It was built with parts from England so it conformed to the English measuring system. Its three pairs of millstones were driven by a cast iron drive train that was new and unknown in Germany at that time.

The windmill ceased operations during World War I. In 1927 the mill was fitted with an electric motor and the sails were removed. In 1936 Wendhausen was declared a "National Socialist model village" and the sails were replaced only for the purpose of decoration. A small fire in the basement in 1951 caused no major damage and two years later the mill ceased operations.
By Daniel Mennerich on 2017-07-08 15:36:16 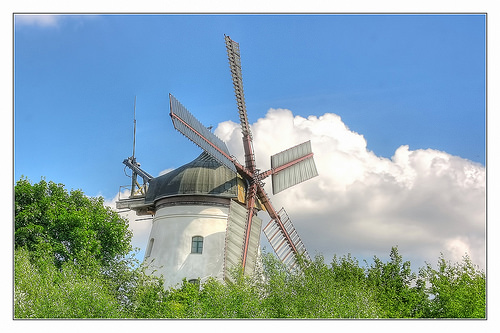