Not your Dad’s Electric Car

You are here: Home / News / Flickr / Not your Dad’s Electric Car

Fisker Automotive, Inc. is an American automaker based in Anaheim, California.

The company’s first product is the Fisker Karma, one of the world’s first production plug-in hybrid electric vehicles. It debuted at the 2008 North American International Auto Show, creating the premium green car segment in which most major manufacturers have since announced they would compete.

The Karma is a plug-in hybrid luxury sports sedan produced by Fisker Automotive and manufactured at Valmet Automotive in Finland.

The 20.1 kWh (72.36 MJ) lithium ion rechargeable battery in each car will come from A123 Systems in Watertown, Massachusetts.

The aluminum frame was engineered by Fisker and is supplied by Norsk Hydro from Norway. The cabin interior is designed by Fisker Automotive, but made in the United States by Magna International of Canada.

The EVer powertrain system, technically a series hybrid, delivers over 400 horsepower, and was inspired by Quantum Technologies, a co-founder of and early investor in Fisker. 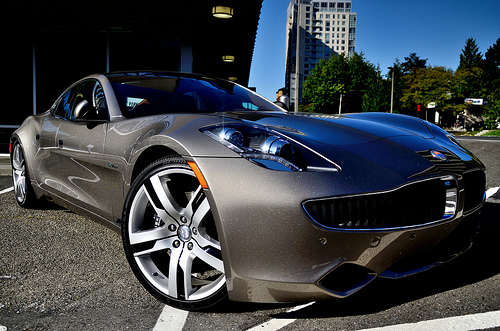