Nay for fossil fuel, yea for renewable energy
Thank you for visiting – ❤ with gratitude! Fave if you like it, add comments below, get beautiful HDR prints at qualityHDR.com.

Last month we stayed in Tonopah, Nevada. North-west of the town is a 110 megawatt solar thermal power plant called Crescent Dunes Solar Energy Project. It will start operating later this year and will provide power for 75,000 homes. The anticipated to cost is a bit less than $1 billion. At the bottom you see the reflection on the panels that mirror the sunlight to a large tower to heat liquid salt, which is used to generate electricity.

This solar power plant can operate 24/7 – hot salt in a big tank stores energy for use at night. A truly large-scale project. An overview video describes this.

Explanation on using "nay" and "yea" in the title, based on Wikipedia article: "While Modern English has a two-form system of yes and no for affirmatives and negatives, earlier forms of English had a four-form system, comprising the words yea, nay, yes, and no. In essence, yes and no were the responses to a question posed in the negative, whereas yea and nay were the responses to positively framed questions."

I processed a balanced HDR photo from two RAW exposures. 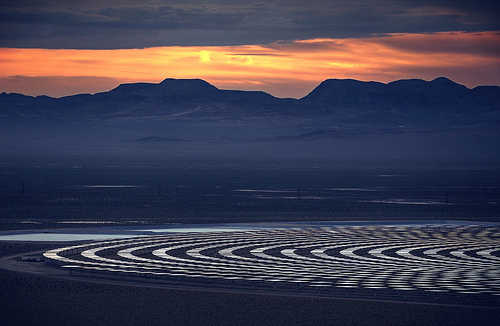 There is no Planet B
Next Post: Lantern Festival at Dusk