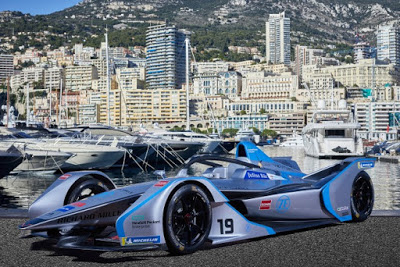 The world’s first racing series for all-electric Formula vehicles is growing steadily in popularity. Following in the footsteps of manufacturers like Audi, Jaguar and Mahindra, the fifth season will see BMW and Nissan joining the series with factory teams. Mercedes and Porsche are planning a factory-backed entry in season six.

New rules this year will usher in many changes. The Gen2 car will celebrate its debut on the track with double the battery energy storage capacity of its predecessor, the Gen1 car. This means it can complete the entire race without the mid-race car swap previously necessary. The Gen2 car has increased power output of 250 kW, accelerates from 0 to 100 km/h in 2.8 seconds and has a top speed of 280 km/h. Venturi will be sending former Formula 1 drivers Felipe Massa (BR) and Edoardo Mortara (SUI) on the hunt for points this year. The German HWA Racelab team will enter the Formula E as a Venturi customer team and acquire its vehicles from Monaco-based Venturi. Accordingly, the electric ZF driveline will be in no less than four vehicles in the starting line-up for the new season.

Cooperation to be expanded

As part of their partnership, ZF has supplied the Monaco-based Venturi team with shock absorbers for its cars and developed a new transmission for season four. Mid-December will mark the first time Venturi takes to the track with a complete newly developed driveline from ZF. In addition to an improved transmission, the driveline also includes newly developed power electronics and electric motor.

“The speed of development in professional motorsports is extremely fast. Because the requirements for the overall system were unclear for such a long time, we had to make many short-term changes and build contingencies into our development work,” explains Tobias Hofmann, Technical Project Manager Electric Axle Drive Formula E. “In the end, our success hinged on good, Group-wide cooperation. In addition to the E-Mobility division, ZF Race Engineering and ZF Advanced Engineering also played key roles in the development of the driveline.”

The entire system is the first electric driveline from ZF that has been developed purely for use in motorsports. In addition to extreme performance and torque density, the Formula E driveline has much greater efficiency than typically seen in series applications. It clearly exceeds most key performance data from season four. An entirely new concept has also been implemented for the interplay regarding the suspension of the electric motor and the transmission.

Because engine output is regulated in Formula E, power transfer is extremely important. “In order to stay competitive in the fight for best lap times, we needed to make significant changes to the transmission design. For the first time, this new transmission uses a single-gear concept as well as new materials, such as a metallic lightweight alloy for the transmission housing. The new concept has enabled us, once again, to reduce the transmission weight substantially; by nearly 40% compared to the previous season’s design,” says Hofmann. “The new driveline has enabled a significant increase in efficiency as well.”

The inverter, also newly developed, is ZF’s first power electronics product with high-performance silicon-carbide modules. The casing for the inverter is made entirely of carbon fiber reinforced plastic. The intelligent control software is based on years of testing in volume production and has been specially adapted to the special demands of motorsports.

Norbert Odendahl, CEO of ZF Race Engineering, is looking forward to an exciting season: “In addition to our classic core motorsports products such as shock absorbers and clutches, we now want to use the new ZF electric driveline to highlight our competence in top flight motorsports and electromobility, particularly under the toughest of conditions. Formula E provides the optimum platform for us to do just that.”