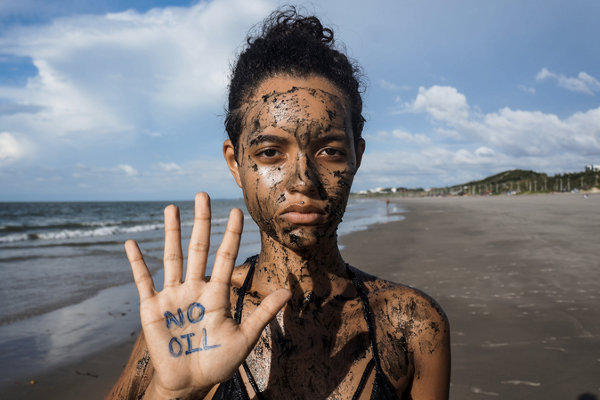 A Total no to Oil

In response to the announcement that French oil giant Total has just made a significant oil and gas discovery 175 km off the southern coast of South Africa, Greenpeace (www.Greenpeace.org) Africa’s Senior Climate and Energy Campaign Manager, Melita Steele, has said:

“Greenpeace Africa strongly condemns Total’s reckless oil exploration off the coast of South Africa. Discovering yet more oil and gas is not something to celebrate when burning fossil fuels is driving potentially catastrophic climate change. This is essentially oil that we cannot afford to burn in the face of extreme weather conditions and recurrent droughts.

“Deep sea drilling is far too risky. The possibility for an oil spill always exists, and the environmental impacts of deep sea drilling for oil and gas are too significant to be ignored[1], with very little benefit or job creation for South Africans. It is reckless of the South African government to allow oil and gas exploration to go ahead, and unfortunate that this was lauded as a victory at the State of the Nation Address last night.

According to NASA, 2018 was the fourth warmest year on record, and it is clear that if we are serious about stopping the worst impacts of climate change, then some fossil fuels must remain in the ground. This country is blessed with some of the best renewable energy resources in the world; it’s time to back renewable energy, and stop the reckless and dangerous dash for fossil fuels.”